Oath is an alt-ware tabletop game for 2 to 4 players. It is inspired by ancient politics and war, times when old royal families and their banner-men would drum up support for conquest. It reflects the nurturing nature of camaraderie and family but also the infectious nature of nationalism. We want to show that joining a clan can be good protection for weak and lonely individuals but it can also incite a mob to crave colonialist expansion.

Oath can be played with any number of Blinks but we recommend using at least six. At the beginning of the game each Blink is neutral and randomly cycles through all four colors. Each player chooses a color to represent their  banner. The object of the game is to turn the entire board your color.

All players start at once. Tap a Blink whenever your color is displayed to increase the probability that that Blink will display your color again. Eventually that Blink will only display your color, at this point it is no longer neutral, it has been converted to your side. Blinks that are aligned to a particular banner color start to influence others around them. All blinks talk, even those that are already aligned are influenced by the majority of the blinks touching them.

To be successful, players must constantly tap Blinks whenever their color appears and reconfigure the board to surround the opposing players Blinks.

- You can not move pieces out of the reach of other players.
- Pieces can not be apart from the group for more than 5 seconds.
- Solo pieces can not be clicked.
- Optional Rule: In games of 3 or 4, Players may only use one hand.

2018: "Out of the Box Award," Indiecade East, Museum of the Moving Image, Astoria, NY 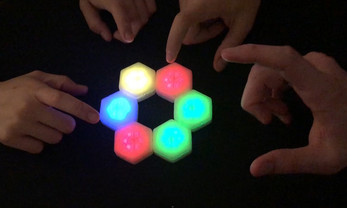 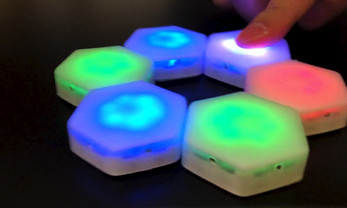